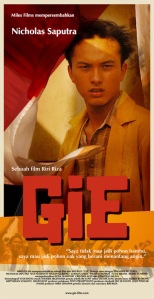 it was a wonderful opportunity that Mira (the Producer) gave me, because I was just a film student, on my way climbing the stairs up, hoping to be a Producer someday, hoping to be like her, someday. and again, Riri (the Director) is my favourite Indonesian Film Director since always. so even if this was a job, this would be one of the best job offer for me.

it’s about Gie, a young activist lived in 1960s and known as an intellectual young mind ever exist in Indonesia, died when he was 27, leaving a lot of wonderful writings, about politics, humanity and love. his only friend and enemy was his own mind, he said. but he lived his live to the best it can be, by being around people.

to be there, working on the biography movie about Gie, working with my favourite Producer and Director, was the only beautiful mess I can expect at the time. and I stepped in.

I have my ups and downs. no enemy, just some thoughts and more-more friends, difinitely a wider landscape ever brought to my sight, how a film production would be look like. so for whatever mess it was, it will be a beautiful memory to remember.

2013 marks a mammoth year for the Ubud Writers & Readers Festival, as Southeast Asia's most renowned literary event gets set to celebrate its 10 year anniversary, 11 - 15 October in Ubud, Bali.

Beyond paying homage to Kartini, the 2013 program will focus on women's stories, women's rights and education, heroes and visionaries. Writers across all genres will be embraced, including travel writers, songwriters, playwrights, poets, comedians and graphic novelists.