introducing: a lifetime gift, Ophio and her kids.

Hello nice people around the world! please let me introduce you to 4 (four) cutest kittens in the world (because they are my kittens :P)

The only girl in the house, is the oldest kitten, here she is: 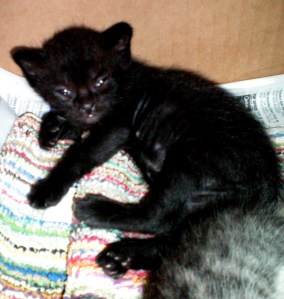 hey, what;s so important than to let me sleep here? x(

The way she stared at me, sometimes, reminds me of a certain look that belongs to a very smart woman, the first lady of US, Michelle Obama.

well, the eyes and eyebrows does look like her! 😀

So, the only girl in the house’s name is ‘mikel’ 🙂 She spent most of her times sleeping (more than any average kittens do) and when she wakes up, she will ‘attack’ another kittens to wrestling. Oh, imagine if the real MO do this too? Please don’t 😛

The next kitten is the only yellow (we call it ‘blonde’) hair, is here:

Now, don’t tell me just yet, but I remember one person, that I believe he has the same sincere quality with my second kitten looks. He’s Time Magazine’s Person of The Year 2010, Mark Zuckerberg. 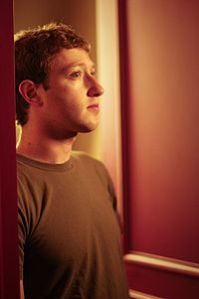 Person of The Year, I heart you MZ!

Ukel, that sounds right for me. He always gets near Ophio, his mama. Sometimes he looks like he thinks about something a lot. Ack, maybe he’s thinking, I’m hungryyyyyy 😛

Move on to the twins. Well, every kittens is twins ha ha, but these two has closest birth range, 1 minute away. The one that came out first is this humble one:

the most humble kitten! 😉

and his little brother, the youngest kitten, is the cutest of all: 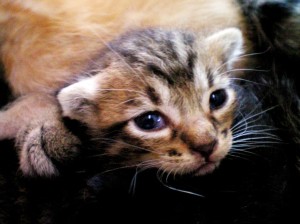 he got the looks of his mama, Ophio

Both of them reminds me of Cole and Dylan, the twins!

So those twins who has Ophio’s colors, named Ole and Dylan. The movie starrrr 😀

Those kittens has been here since Dec 2nd, they’re almost a month old. They started to crawling up the cardbox wall, and walks dizzily to one another. They paid attention to people who comes and go starring at them. And they starting to recognize stranger and familiar face. From all the unique moments I captured with my pocket digital camera, here’s some of my fave: 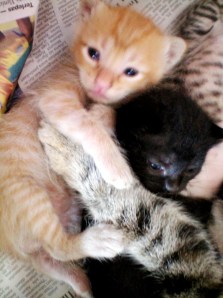 Mikel, just waking up from a long deep sleep.

Ukel just trying to get warm in mommy's arms

the light shone behind Ukel, beautiful 🙂

Ole and mama, one nap time. 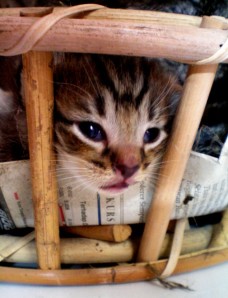 Dylan playing around with his sister, mom can do nothing about it 😛

'see what u did waking them up? now I have to feed them again. Gimme a break!' sorry, Ophiooo 😛

Ophio, and her cozy corner (place to hide), my clothes cabinet! smart 😉

After a while, I put them in a place warmer than the parcel basket, but Ophio sometimes took her kids out and sleep on her basket, I never understand why she did that. Until when I was just got back home, I saw this beautiful sight. 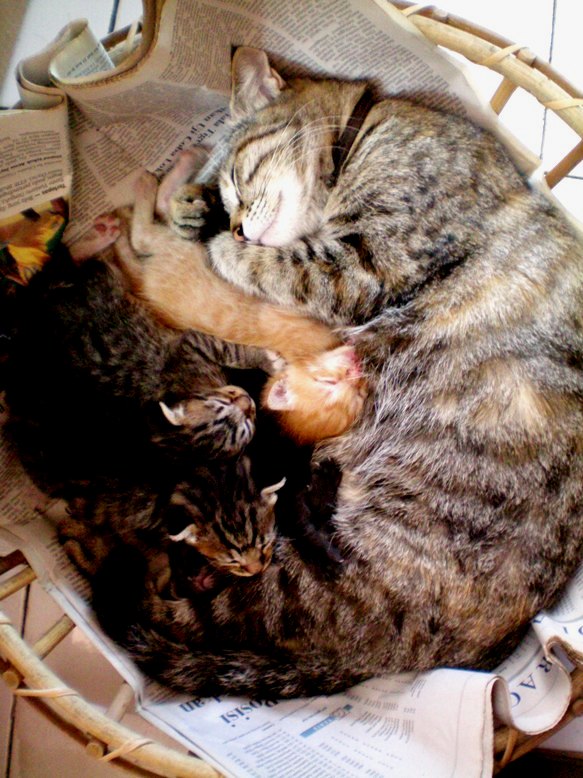 introducing: a lifetime gift, Ophio and her kids.

I never want anything else but these precious moments should never be taken away from me.

Good night, Ophio and kittens! I wuv you all sew much!!! *kisses

in the meantime, I’ll keep it dark

I will never forget the day you were born, when I counted three and I know there was one more. I didn’t feel asleep at all, somehow I know you were coming. And there you were, coming into my life, with a simple sound you made.

When you came out, you pushed you sister to reach closer to your mama. I remember it was silent and one deep sound you made. Since then, you are unique. You have all of this black fur on almost your whole body, unless your inside neck, your fingers, and your feet. You were an amazing color, black and pink. That’s the day you were born. When you let me know that this is it, and I can rest my self to sleep then.

Somehow you noticed her silence and deep, so you always came to her and be the soldier on the front line with her. “You throw the line, I will jump in!” you might said. For your oldest sister, you were her partner in crime.

For your only brother, you were always coming protective, and you came rebel to anything you thought would harm him. You kept him warm, you kept him safe. Awake until he fell asleep.

Wether you were asleep or sit on your corner calmly, when your third sister came and joke around, you took every chance to have fun. And no matter what games she brought up on you, you always managed to be undefeated. “I may be the youngest, but I shall never defeated!” you may say out loud.

the most comfy couch for everyone

Everyone laid down their head on you, at the end of everyday.  You often moved your self to sleep alone in a corner, but they still came to you, snuggling and and kept you warm. Oh, how you became the most comfy couch in the world!

You had a lot of posing style in your sleeps and when you’re awake, you will stay alert.

symptoms that made you weak

You started to walk slowly, not running anymore, and fell asleep everywhere. I wasn’t brave enough to touch you, for I want your mama smell you the same. But somehow that night, when you didn’t respond to any of my touches, I knew you have not much energy left. You just kept breathing. Your mama stay awy from you, so I reached and held you in my hands, tried to keep you warm. I kissed you so you know you’re not alone. You were very silent, only soft and weak voices came out. It broke my heart. 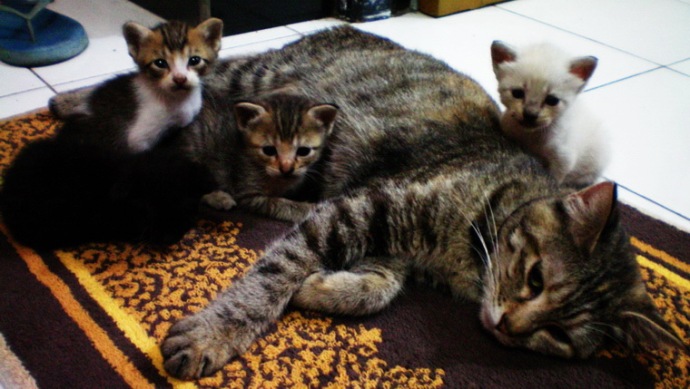 The sun has rised yesterday, I realized you won’t have anymore times to stay awake with us. I sang you a song, “One day in your life, you’ll remember at last. Someone touching your face. You’ll comeback and and you’ll look around you..”

...and will be missed so much.

So you fnally fell asleep in my hands. You didn’t even moved when my tears fell down on your face. “You’ll remember me somehow. Though you don’t need me now, I will stay in your heart…”

It would take sometimes to move on, without you. Tonight my friends promised themselves that they won’t bail on any chances that comes into their life. That they will live fully for the chance. That I, whispered, if there’s another chance, I know I will be blessed to meet you again. I know from that moment on, I’ll let the sun rise wakes me up everyday. Fresh start. Fresh hope.

In the meantime, I will keep it dark. So you will stay on my side every night. Falling asleep. Safe and sound.

Song: One Day in Your Life by Michael Jackson

I hope it was just a dream. A black hole in my own kitchen and always, feeling lonely in the crowd. Fine. It’s a classic dream of mine lately. But when I found my self crying softly, silently, I knew he’s gone. and it hurts.

I never expected to love him this far. I never planned to care and love him deeply, wondering what he’s doing everytime, every second I realized he’s not near me. I’m not always following his sense for a while when he’s jumping to hug me and simply put his head on my lap out of nowhere. Everytime was just a regular times I’d spend with anyone. So I wonder why should I feel like I’m losing him this deep.

He never has any exact time to be any kinds of mood. He’s sort of random when it goes to what he wanted to do. Just one for sure, is that he always got curious with everybody’s steps and always take position to be ready to jump and hug people’s feet. And yeah, he can tell the difference, whose feet were there.

Not once he talks, or whisper, everything was always managed by his own skill to understand what happened inside the house, what happened with the people, so he used to  just wait and be patient, until it’s time for us to finally took care of his needs. somehow we managed okay.

With his own way, he gave reasons for my mom to start to build her marriage life with her husband, once again. And it was the biggest surprise I ever acknowledged given from him, that from that moment on, he became a member of this mess family. A member worked hard to put a smile on everyone’s face, no matter how the days been for each of us,  even by causing mess in the house.

Tell me I’m crazy, but I love him deep. Feel like I’m losing 999 of my 1.000 hopes when he was gone. Losing my only reason to come home. His short illness hasn’t bother anyone yet, and yet he was gone, in a corner he loved so much, when he used to hide from other stupid cats outside and fell asleep there when it rains, when it was time to sleep.

And I always believed he was sleeping, finally rest assure his hyperactive moves and lay down all of his curiousity.

Yes. He was just a cat. And it hasn’t stop my tears falling down since then. because he’s just a cat. My cute-weird-hyperactive cat. So long, babe. I will miss you, very much.

2013 marks a mammoth year for the Ubud Writers & Readers Festival, as Southeast Asia's most renowned literary event gets set to celebrate its 10 year anniversary, 11 - 15 October in Ubud, Bali.

Beyond paying homage to Kartini, the 2013 program will focus on women's stories, women's rights and education, heroes and visionaries. Writers across all genres will be embraced, including travel writers, songwriters, playwrights, poets, comedians and graphic novelists.